All you need is loaf!

Coming from A small city in North India, the only kinds of bread you are exposed to is the normal sandwich loaf or a pre made pizza base; both completely unhealthy. In the city I come from you still don’t get brown bread easily. There’s not much bread culture there anyway unlike Bombay where you get brun pao, fugias, focacia and what not. Around 15 years ago when my maternal uncle showed me a picture of a French baguette (he had just returned from a trip to France) I was amazed to find out that such varieties existed. I had a similar feeling when I visited The Baker’s Dozen earlier this year.

The Baker’s Dozen, a bakery owned by Sneh Jain and his wife Aditi Handa, specializes in Artisan breads; breads that are made without any preservative and are hand crafted. The breads that I saw at The Baker’s Dozen were completely new to me, maybe except a few like focacia. The best part about these breads were that most of them were made of whole wheat flour thus making them even healthier. This and a bag full of breads at the end of my visit was enough to have me jumping with joy.

Till now I have tasted six of their breads and each has a different taste or as they put it, a character of its own. Pain au levain (Rs 120) or French sourdough has a crusty top and is soft on the inside and comes with filling like walnut+raisin, apricots+cherries and cranberries+blueberries. The bread is ideal to make tartines but I prefer it eating plain with a little olive oil and balsamic vinegar drizzled over it.

Pain au cereal (Rs 100) which is quite similar to Pain au levain in look and texture is packed with flaxseeds and sesame and is a little bitter. I had taken this bread to office and everyone happily gobbled it down with spicy haleem. The focacia (Rs 60) is very different from what I’ve eaten at other places. It’s a little dry and I was told that they do not use olive oil to make it. However, the Mediterranean bread is full of olives and is complete on its own. 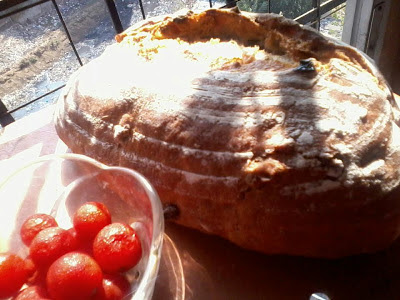 One bread that you must not ignore is Brioche (Rs 100). This French bread is high on eggs and butter which results into an extremely soft crumb. Since I got a loaf version of this bread I cut it into slices and tried toasting it only to realize that the bread was too sensitive for that. A light toast with butter would be a good way to eat it. I had it with Strawberry butter given to me by Shivani (that deserves a separate blogpost altogether).

Next bread that I tried is Puccia (Rs 30 for two), Italian wheat flour dinner rolls packed with olives. These soft and fluffy breads were eaten with a carrot dip. I made this carrot+yoghurt+olive oil+garlic dip recently and became an instant fan.

After operating from their bakery in Wadala for initial few months, The Baker’s Dozen recently opened their first outlet in Prabhadevi. On World Bakers’ Day they launched a new Jewish Sabbath bread called Challah (Rs 120). The bread has a long History and religious significance to it. You can read more about it here. Challah has a lovely golden crust and is made with generous amount of eggs. I ate it with garlic n herbed butter, akuri and bruschetta topping and it was perfect with everything.

I’ll give a big thumbs up to Sneh and Aditi for introducing us to such great breads. While I write this post I already plan my next order from The Baker’s Dozen and pray that they have an outlet in every suburb. More breads for everyone.