It took us a few seconds to realize that there hasn’t been an earthquake in the store and the shelves are strategically placed to look like as if they are falling over each other. The decor is classic. Wooden cabinets adorn the walls with books, crockery, music CDs, an old tape recorder and a Polaroid camera adding to the old school charm. A couple of staff members were sharpening Natraj pencils to place on every table with Sudoku sheets. 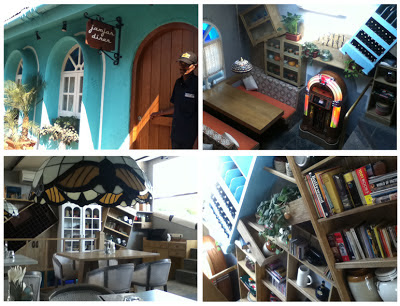 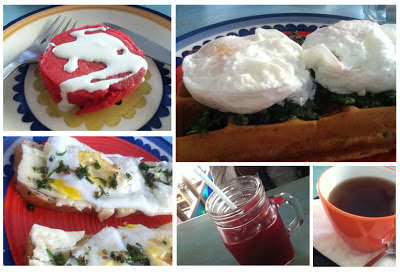 Beatles’ ‘all you need is love’ played in the background and we screamed excitedly spotting the source of the music, “look they have a jukebox!”. The morning couldn’t have started on a better note. We headed straight to the mezzanine floor to grab a corner still admiring the taste of the restaurant owners who also own the famous Bonobo in Bandra.
The menu consists of burgers, sandwiches, pancakes, waffles, bar snacks and more. We decided to stick to the breakfast section and ordered a Red Velvet Pancake (Rs 140), Popeye – poached eggs, creamed spinach, cheddar, jalapeno waffles (Rs 201) and Eggs Kejriwal – fried eggs, green chilies and cheese served on toast (Rs 178). The last one was ordered just out of the curiosity generated by the name. We sipped on our apple pepper juice (Rs 140) and earl grey tea (Rs 78) while waiting for the breakfast. The juice was served in an old style jam jar or barni and that’s how we figured out the idea behind the name.
Our order took a little time but arrived fresh and hot. The red velvet pancakes were fluffy and soft and were served with whipped cream. We felt that either the pancakes or the cream needed a little sugar; the staff served us some sugar on the side that we sprinkled on the cream. Popeye had beautifully poached eggs served on crispy jalapeno waffles with a topping of spinach and cheddar cheese. It was a little heavy on salt since jalapeno, spinach, cheddar have a lot of salt content in them. The poached eggs however were perfect; the yolk was neither too hard nor too runny.
The dish with the most amusing name was very simple – fried eggs and cheese on toasted breads with a topping of fried green chillies. It was like something you make at home to fix a quick breakfast. While digging in we wondered why it was called Eggs Kejriwal and came up with different reasons, finally we asked the staff. We were told that the dish wasn’t named after a certain activist. It is named so because a local guy of the same name liked his eggs fried and served on toast with cheese and green chillies; a dish served in Mumbai clubs.
On our way out we spotted a jar full of Phantom Cigarettes. The staff offered some to us and we left happily but not before posing with them. 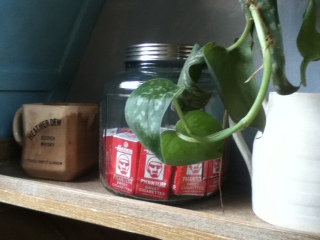 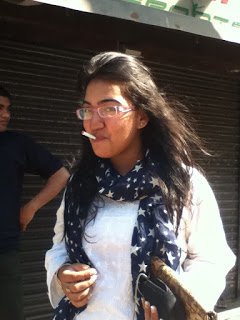